This session felt more appropriately epic in scale. Some of the players are still new and I need to work harder to not jump in and suggest things to them. We had the party split between several locations, which was challenging to run and to keep everyone involved (especially the two who were tied up). Overall I felt we all got into the flow of the story, although I forgot to do the end-of session XP (but half of the characters levelled up in-session).

Talisa, an elven ranger, and her faithful watersphinx Mija, were tracking the daughter of a family friend and followed a lead to the mountain where the gargoyles lived, hoping to get some information from their leader. The gargoyles were not in a bargaining mood and took her prisoner. The big cat escaped and has been skulking around the edges of the caverns waiting for an opportunity to help her captive companion. 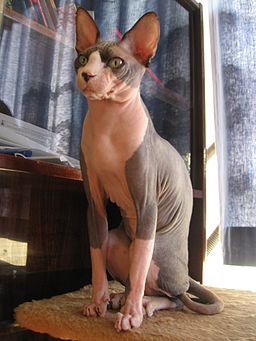 Watersphinxes resemble domestic sphinx cats in that they are loyal, friendly, and nearly hairless. In Dungeon World they are also the size of cougars, highly intelligent, and ruthless when their companion is threatened.

Tsafnur was carried by the gargoyles up and along the narrow passageway until it opened up into a large cavern. There were 12 stone columns with shackles, mostly holding chained corpses, but one living prisoner. The columns were arranged in a circle around a grotesquely carved altar, and the gargoyles landed by one of the columns, unchained the corpse, and shackled Tsafnur to it. Other gargoyles milled about in the dimly torchlit cavern, and one part of the chamber, opposite from where Tsafnur was brought in, was mysteriously pitch black with none of the torchlight penetrating it at all. Talisa, tied to another of the columns, watches all this ready for any opportunity to turn her luck around.

Chameleon had followed and watched this in her bat form. The remaining gargoyle flew past her to rejoin its comrades. She counted 12 gargoyles in the room, all somewhat agitated, moving around the room without apparent purpose. She flew back to the others to lead them here to mount a rescue.

Clovis and Enkirash had jumped over the crevasse to where the narrow path continued on the other side. Enkirash almost fell, but caught the edge and when Clovis hauled her up, her sash (which had several useful potions tied to it) caught on the rocks and fell into the depths. Enkirash is developing a pounding headache and can feel energy surge around her through the rocks. Somewhere nearby there is a dark summoning ritual going on, and she thinks that if they do not stop it from being completed, things will go very badly for them. There is a natural river of energy flowing through here, and it is being turned to some very nasty purpose.

When Chameleon finds her friends, she leads them up the steep cliffs by turning into a large fruit bat and carrying the end of a rope up, then resuming her human form and tying it off securely, then repeating when her companions have climbed up. They begin to notice that her face doesn’t change back to her own face after each transformation, it is like she comes back as someone else, but only for a few moments before her own face gradually re-emerges. She has become irritable and snappy with them as well, and she can feel that something from the gems she carries is changing her.

On the last of these climbing stretches, four gargoyles that were lying in wait, hidden in the stone, emerged to attack Clovis and Enkirash as they climbed. Chameleon threw her spear at them, but only managed to lose it into the chasm. Two of them tore Enkirash away and flew off with her, while the remaining two attacked Clovis and the rope she was clinging on to. Clovis took a nasty clawing as she dangled on the rope trying to get a good swing in with her axe, but after some time the two gargoyles perked their ears as if they’d heard something and then flew off.

Back in the cavern, Tsafnur recognizes some of the imagery on the altar from a song he heard long ago from The Dead Minstrel, who himself was cursed to be undying, although still aging, just bones and skin when Tsafnur knew him. He played a bone flute and taught a younger Tsafnur the songs and stories of the ancient horror Arakgnash, both dragon and lich, feared for centuries although fortunately no longer troubling the earth. Or so the songs said. The shackles are “one size fits all” and Tsafnur has managed to squirm one hand free when the gargoyles fly in carrying Enkirash. As they land by another column, two gargoyles unshackle the corpse from it while the two who brought Enkirash hold her. Tsafnur still cannot free his other arm, but he throw his last coin and one of the gargoyles (sadly not one of the ones holding Enkirash) pounces on it excitedly.

About this time, Chameleon drops her bat form and lands just behind the gargoyles holding Enkirash, transforming with a snarl into a large brown bear. Mija, watching from the shadows, sees that this is her opportunity and takes one of the gargoyles down while Chameleon crushes two others. The remaining gargoyle (nearby, there are eight more scattered around the cavern) who just dove after the coin, is terrified of these two ferocious beasts that just came out of nowhere, and flees. None of the remaining gargoyles seems eager to approach the circle of pillars, so Chameleon drops her bear form and unchains Tsafnur and Talisa.

Enkirash wants to stop whatever ritual is occurring before it is triggered, and senses that one more sacrificial death could push the energy over the edge. She also senses that the focus of the spell is not on the altar, but something within the altar, so she rushes over to try to find a way to open it. Just then the inky blackness covering one part of the cavern dissolves into normal shadows at the edge of the torchlight and out steps the enchanter Hurbekt the Cruel, robed and belted in black, with thin fraying black hair, thick eyebrows, and a tight triumphant smile. He is carrying a curved black dagger with runes carved into the blade. Tsafnur draws his rapier, steps over to the enchanter and tries to run him through, but a roughly circular patch of seeming void opens in the air just before the blade reaches its target and Hurbekt is unharmed. Talisa fires an arrow at the enchanter and another circle of darkness opens, with the arrow disappearing into it entirely. Each circle disappears as the weapon is withdrawn. Tsafnur tries punching the enchanter, and as his hand goes into another of these circles he feels endless cold, despair, the lure of death, the futility of existence, overwhelming ennui. As Hubekt raises the dagger, Enkirash tries to move his arm within the void as an attempt to make the enchanter drop the blade. Instead, he severs his own arm and , and Hurbekt stabs Tsafnur with the dagger, which seems to not only cut his flesh, but somehow tear at his very soul. Tsafnur is badly hurt at this point.

Over by the altar, Enkirash has found and opened a secret compartment, revealing a pointed fragment of bone about 50 centimeters long. For the first time, Hurbekt looks concerned, snaps his fingers and calls out “to me” to the remaining gargoyles, who all leap into the air towards him (even the two still harassing Clovis on the rope). “Kill them,” he orders, and the gargoyles circle warily towards the group, focussed on Enkirash.

Talisa picks off three of the gargoyles, Mija and Chameleon take out more, leaving one scared gargoyle which looks like it would rather be anywhere but here.

Finally able to climb in peace, Clovis reaches the top of the rope and rushes into the chamber, hurtling over the two-meter drop from tunnel to cavern floor, but misjudging how rough the floor is and goes sprawling near the altar, which conveniently keeps her out of harm’s way as Hubekt releases a wave of dark energy through the room. Most of our heroes manage to avoid the worse of the blast, but it caught Enkirash solidly with a feeling of desiccating muscles and nausea.

Hurbekt raises the dagger again to finish off Tsafnur, Enkirash grabs the bone fragment and throws it at the enchanter. Clovis gets up, vaults over the altar and charges at Hurbekt. The bone stabs into the enchanter’s chest, and he looks more surprised than pained, since no circle of void opened up to block it. His surprise is short-lived as Clovis takes a flying kick to drive the bone through his heart. As the enchanter sinks to the floor, the last remaining gargoyle flees, and Enkirash can feel the ritual slowly begin to unravel.

The group secure the area as best they can and set watches, with Mija patrolling the perimeter. From the gargoyles they managed to loot some cheap but shiny jewelry, and from the Hurbekt’s body they take a smooth silky rope belt, a pouch of small diamonds, the curved dagger, and the bone fragment. They make camp, have a meal, heal up a bit and reflect on their adventure so far.

At this point Chameleon, Tsafnur, and Enkirash level up. Clovis is one XP shy of leveling.

There are three obvious passages from this chamber, the one they came through (we’ll call that “south” to have relative directions from it, but none of the adventurers have any real sense of compass directions at this point), one to the west, and one to the north, which was where Hurbekt had been concealed in the magical darkness. They decide the north passage is the most likely to have the enchanter and gargoyle’s treasure cache, so they head that way when they break camp. Clovis is in the lead, with Enkirash following (with a light spell on her staff to light the way), then Talisa, and Tsafnur, with Mija bringing up the rear. For additional light, Chameleon has taken the form of a giant firefly and her glow slowly pulses overhead, so the area goes from brightly lit to dim, over and over as they walk. Clovis is using her dwarven knowledge of stone and underground to watch for secret doors in the walls, but is so focussed on that that she accidentally steps on a loose cobblestone which triggers a pit trap behind her, where Enkirash and Talisa are walking, but they manage (barely, in Enkirash’s case) to leap to safety. The party is now separated by three meters of pit, at the bottom of which are sharp iron spikes, skeletons of earlier victims, and as they peer more closely, giant mukade centipedes, each nearly a meter long, scurrying around the bones.

Clovis and Enkirash decide to continue exploring ahead, and Chameleon stays with Talisa and Tsafnur to provide light while they wait. The passage continues a short distance, then opens into another cave, more finished than the cavern they’d camped in. In here are curtains that look like they might be around a bed, a jumbled pile of furnishings (a chair, a candelabra, etc.), a sturdy looking chest, some threadbare tapestries on the walls. The floor is extremely uneven here, rising in a large lump in the middle of the floor, but there is plenty of room to walk around it.

As Clovis and Enkirash skirt the stone lump, it rises up and unfolds until they are facing a gigantic six-armed gargoyle with glowing red eyes. Meanwhile, back at the pit, the rest of the party realizes that the centipedes can climb walls, and with every pulse of Chameleon’s light they are getting closer.