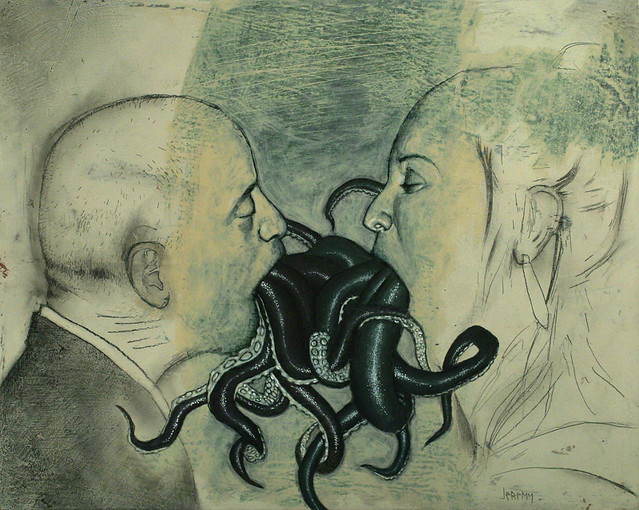 Clovis, Tsafnur, and Andrew continue to try to get Genesa home. But we left off last time on a cliffhanger…

As the baby-bodied giant spider-thing emerges from a hole in the base of a tree, Andrew cowered back in horror, but had the presence of mind to cast light on Clovis’ axe, Bitey the Second. Genesa tries to hide behind Andrew at the back of the makeshift tent. The spider-thing says “pretty” as Clovis swings the glowing axe at its legs, nimbly moving the legs out of the way and keeping its body high out of the dwarf’s reach. Frustrated at not being able to chop anything, Clovis threw a dagger up at the fat baby body, hitting it hilt-first. “Ouch”, said the baby-head, which then opened its mouth wider and wider until the head split nearly in half, vomiting out slimy black tentacles to engulf and bind Clovis. Clovis managed to wrestle her axe-arm free, but was still unable to chop effectively at the thing.

Tsafnur came up and sliced at the tentacle, cutting through half of them. Two fleshy tubes on either side of the creature’s mouth spit out dart-like globs of viscous green slime at Tsafnur, but missed due to Clovis’ struggling. The spider thing drew up one of it’s sharply pointed legs and drove it down, stabbing deep into Clovis, but she was then at least able to retaliate by chopping the end of the leg off. Faced by two foes, the spider thing let go and retreated swiftly back to the tree, saying “You’re not my friends”, and beginning to fold itself back into the hold at the base. Tsafnur rushed forward with a shout so powerful it bounced the thing’s body off the tree, followed up with a rapier thrust that impaled the baby body to the tree. The baby-spider thing cried a little, and died. Andrew and Genesa wanted to pack up and get as far from the place as possible, but were over-ruled by Clovis who wanted healing and sleep.

And during the night both Clovis and Tsafnur managed to level up.

By morning the rain had begun to slacken. Tsafnur read another of the songs from the his mysterious songbook (bound in human skin), sounding the unfamiliar language quietly to himself using the pronounciation key to memorize the song. Andrew wanted desperately to wash up and perform his absolutions to Kirt the Clean, and talked Clovis into washing off some of the slime left by the spider-baby thing’s tentacles. They found a creek near the camp, swollen by the heavy rain, but Andrew (going first) was startled to come face to face with two demons across the stream from him and shrieked a little. The demons were startled too, one of them grabbed the other and aske, “what is that?” The pair were very dirty, with dirt-grey skin, cracked and rough, caked with dirt and possibly blood. Black eyes and squished-in pug noses, scraggly thin greasy hair, and webbed fingers. They had no ears, just holes in the sides of their heads. They had tails, but not prehensile, they seemed to use them more for balance.

Clovis comes up and sees the demons and says, “hi.” The two confer among themselves, “What did it say?” “How should I know, I don’t speak the local lingo.” “Well, neither do I, but it sounded like it said ‘hi’, maybe it’s friendly?” Then one of them waved tentatively and said, “Hi?”

Andrew is further disturbed by the fact that the demons aren’t wearing clothes and tells Clovis, “that’s how you know they’re demons, they aren’t ashamed of their nakedness.” Clovis doesn’t have a problem with nakedness and offers to bath with the demons, who, when they realize she’s hitting on them, are appalled. Eventually they all get washed up and offer the demons food, which they eagerly accept since they are starving and have no idea how they got into this unfamiliar world.

Refreshed and accompanied by their new companions, the party is ready to set out once more for Orintheldir Manor, but discover a new problem: they can’t find the road. They made camp only a short way from the road, it should be obvious, but it clearly isn’t there. Clovis climbed a tree, but could only see tree canopy and low clouds. They decided to follw the creek downstream until they find the road or a way back to Skagway. The stream itself gets fuller and faster, running through a deeper cut in the forest, with more rocks, small waterfalls, and becomming more treacherous to follow. Clovis killed a rabbit with a thrown knife and began gathering random plants with the intent to make a stew.

Eventually they came up behind a decrepit hovel of a farmhouse, with a sad weed-choked garden. Going up to the door, Clovis asked the suspicious farmer (who didn’t open the door fully, just glared out after opening it a crack) for help finding Skagway. They were told to take the dad-blammed road, which turned out to be a rutted and muddy track near the hovel. He then stuck a pitchfork out threateningly. Andrew stuck a tract with the good news about Kirt the Clean on the tines of the pitchfork, and got stabbed with it for his trouble. They could hear several dogs barking inside, and the farmer was calling for someone to turn them loose as they made their way out of there (Clovis stopped to steal more random plants from the neglected garden). Eventually the track joins up with a road, which seems to be the road they followed yesterday, and taking it around a turn they see Skagway ahead.

Back in Skagway they purchase some clothes for the reluctant demons, to avoid them attracting more attention than they already do, and a covered wagon with two horses, which Genesa appreciates (although she tries to negotiate for them to buy some pillows as well). Tsafnur finds a wizard and tries to find out if he can return the demons to their home plane, which he claims he can, but he wants too much money, initially 500 coins, but then 400, 300, 200 as Tsafnur walks out. The horses, both mares, are named Bob and Ralph Jr. and Clovis bonds with them immediately.

They set out at midday and follow the road, passing where the dwarven caravan had been the day before (there are signs of it having been moved into the woods). They come to a fork in the road, which seems to confuse Genesa, but she is sure the left fork is the correct one. Towards evening they find an inn with a stable for the horses. The demons sleep in the wagon while the others stay in the inn. Clovis tries to hit on the bartender and gets a free drink out of it, but no more than that.

The next day they set out again and come to a small town filled with soldiers, and blockading the road. Two soldiers approach the wagon and demand to search it to make sure they are not carrying elves or elvish goods, claiming that there is a war going on against the elves. This is news to everyone in the party. The players ask how to get to Orintheldir Manor and are told they must have taken a wrong turn. When Andrew starts trying to convert the guards to Kirt the Clean, they decide the party are harmless but annoying and send them on their way (back the way they came). They buy a hat to cover Genesa’s more obvious elven features and return to the inn, where people are suprised and shocked to hear about both a war against elves and a town up ahead (Genesa insists there was never a town there before too). Tsafnur busks at the inn with the song he’d memorized that morning from the book.

Heading back toward the mysterious new village, stopping the wagon out of sight, Clovis goes ahead alone to confirm that the town and soldiers are indeed still there, and don’t look new. They consider ramming through on the idea that it is all an illusion. Deciding against that, they turn off the main road, down a wagon track to a largish farm, trying to find away around the town. Talking with the half-elf farmer, who also insists there is no town nearby and no war against elves, who have lived peacefully in this area for thousands of years. He agrees to accompany them to the road to see for himself, after arming himself with a bow (and his wife gives them a basket of food). They go back to the road and he disappears into the woods for a closer look, coming back to confirm that he sees the town and soldiers too. He is extremly concerned about this.

When the players tell him they are trying to reach Orintheldir Manor to return Genesa to her home, he recognizes Genesa (by name, he doesn’t know her personally) and says the shortest way would be through the woods, and his eldest son can guide them. Meanwhile he and his other children will notify the other locals and raise a militia. Clovis and Tsafnur are reluctant to leave the wagon and horses behind, but are assured they’ll be safe in the barn.

Full disclosure: The spider-baby thing was loosely based on Adam Koebel’s Legchild. Tsafnur’s book was even more loosely based on the Book Bound in Pale Leather. The two tourist “demons” were based on Herp and Sweaz in Tex Arcana, filtered through players who haven’t read it (but everyone should read it, it is an amazing mix of Western, horror, occult, humour, great art, and wonderful dialogue).