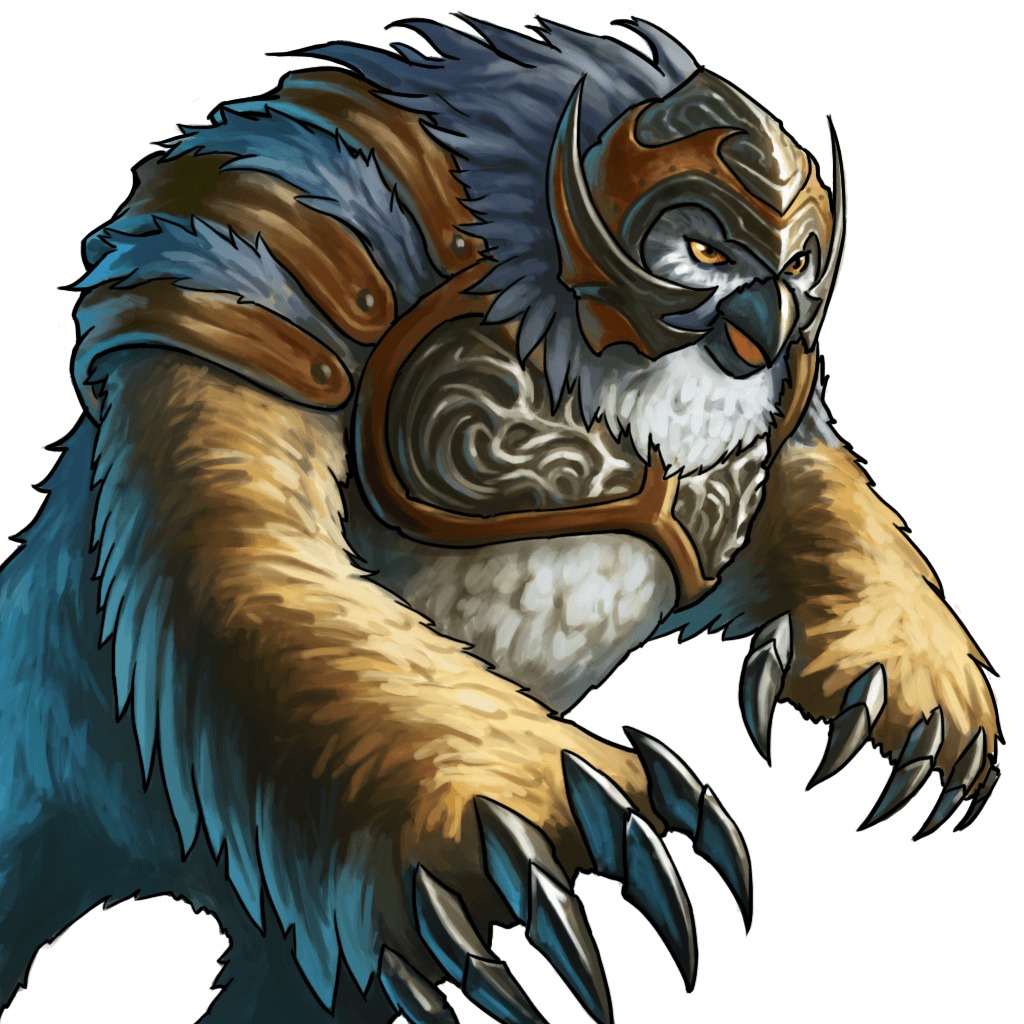 Two sessions in one. First we find out what happened with Rook and then we join the rest of the party for a bit of carousing.

When the rest of the party last saw Rook and Wulfric, they were being overwhelmed by goblins. When Rook last saw them, Tsafnur was running away and Chameleon had changed into a great osprey and flown back, not to rescue her, but to take the locket from her. Then she was buried under a pile of goblins.

She was stabbed and beaten, but not killed. Instead they dragged her back to their caverns and tied her to a stalagmite, sharpening their knives and discussing how to torture her the longest. The goblins started getting distracted and nervous when howls of rage started echoing up from the lower caverns. They left her tied up and went off to investigate, leaving her bound and in pitch darkness. Then the screaming started, as whatever was down there began killing goblins. Rook managed to free herself from the stalagmite and stumbled in the dark down the nearest corridor, eventually bumping into a large chest and hiding behind it.

As terrified goblins fled back up into their section of the caverns, they were pursued by something large and enraged. The sounds of goblins being torn apart came to Rook, as well as a horrible smell, like rotting corpses. The creature came down her corridor, smashing blindly at the walls and crushing the chest she hid behind, but did not find her in the darkness. After it left and the sounds of carnage receded into the distance, she felt around in the remains of the chest, pocketing some small gems, coins, and a necklace with a locket. She then felt her way back out to the stalagmite room and found the corridor leading to the kitchen where she came in originally. The floor was sticky and the smell of rotting flesh was overpowering. She scrambled up the chimney, and was about to head back to town when several men came out of the woods around her, lead by Nameless. He accused her of trying to trick him, feeling that she took too long for such a simple job and she probably was going to try to run off with his prize. He demanded the locket and she threw it to him. He seemed a little surprised at that, but checked that it was indeed the locket he was after, then instructed his men to kill her. She bolted back down the chimney, followed by several of Nameless’ men.

The howls and screams began to approach again, from a passage leading down from the kitchen and she went back to the stalagmite room and took the passage down to the big cavern, where she last saw her companions. Behind her she could see the occasional flicker of light as her pursuers lit torches, but she had a good head start and knew the area better than they did. They seemed nervous and reluctant to chase after her too fast.

Feeling her way as quietly as she could across the bone-strewn floor, she found the curtain wall and followed it, coming to a place where it had be broken, leaving a gigantic hole. She could still hear the huge beast, and the sound came from different directions, so she began to suspect there were two beasts. Behind her, the torchlight illuminated her pursuers at the mouth of the passageway, like a beacon blazing in the darkness of the huge cavern, and the howling stopped. Something large and fast was heading their way, and her pursuers turned and fled. From their screams, she knew they didn’t get far.

She found the stream and headed up it, but when it went uphill she lost her footing and slid back, banging her head sharply. Rook woke, freezing cold and soaked, lying in the stream, with no idea how much time had passed. She found the path leading to the hive room, but the hives had been smashed and the horrible smelling honey was everywhere. She got quite a bit of it on her as she stumbled in the darkness, and began hallucinating. An indeterminate time later, her head cleared and she found she was out of the caverns in the woods. She found a stream to clean the honey off and headed back to town, cautiously to avoid encountering any of Nameless’ people.

Back to the rest of the party now.

The elves (Enkirash and Talisa) decide not to go into town with the others, preferring to remain in the woods. They are going to try to pick up the trail Talisa was following before being captured by the gargoyles. Clovis, Chameleon, and Tsafnur head into town. They find someone to help identify their items, and Chameleon finally knows that the golden compass is supposed to point to safety, but was broken in a magical backlash, but that Enkirash can probably fix it. Clovis has some jewelry made into a custom choker of ostentatiousness.

On the way out of the magic shop, Tsafnur is take aside by the shopkeeper and asked for information about some gems, which he wants to get for the sorceror Shadebolt, who lives outside of town in an iron tower.

Then they went bar-hopping. First up, The Dragon and Coward Inn. Clovis picked a fight with a smuggler in the corner and easily took him out. He had an owlbear companion who was not so easily bested, but she eventually wrestled it into submission. Tsafnur made good money betting on her, although he gets some suspicious looks when he uses his music to heal Clovis during the fight. After the fight, they find Rook was watching the whole time and they have a reunion.

At the next bar, The Whisker and the Weasel, a very drunk Clovis makes a pass at a horribly scarred man at the bar, who fights her instead (and loses).

His companion, a fly-faced humanoid, is impressed and hits on Clovis, who goes home with him.

The next day they visit The Sinking Hole and Clovis gets in a wrestling match with man who looks easy to beat, but they end up in a long drawn out brawl until they both can barely stand. At one point he rips off her Choker of Ostentatiousness and throws it into the crowd. Someone slips out the door with it, but Chameleon follows them, and turns into her great osprey form to swoop down in an alley and take back the choker, returning just as Clovis finally triumphs (barely standing herself by that point). During the match, Rook picked a pocket, but drew attention to herself, so they head out of the bar after Tsafnur collects his winnings from more bets.

In the morning, they decide it is probably best to get out of town before Nameless catches up with them, or worse.

This was a hilarious session, one of the side effects was players googling “Sexy Owlbear” which turns out to be a thing. Updated with corrections from Sarah (Clovis)